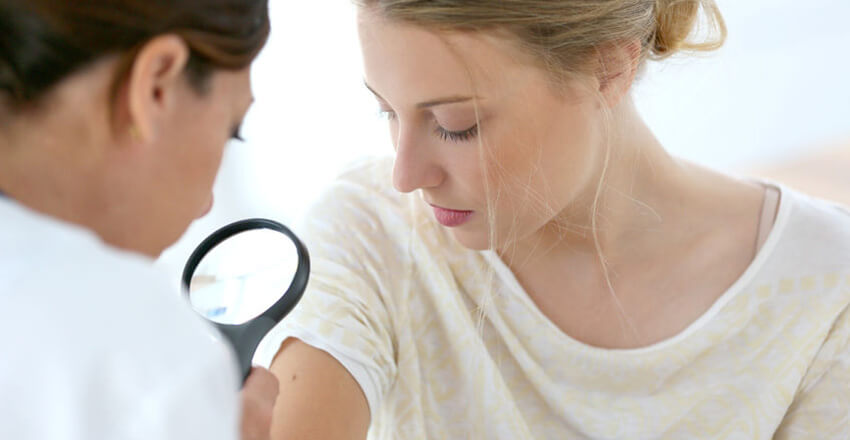 Finding a lump or a new spot on your skin can be scary. You’re not sure what exactly it means or if it’s dangerous. The best thing you can do if you notice a lump or changing spot is to see a dermatologist as soon as possible. While you’re waiting to see your doctor, it’s good to do some research on your own so that you have a better understanding about what you are experiencing.

If you’re worried about melanoma or sarcoma, we’re going to help you discover the differences between the two by describing what each looks like and some common symptoms.

Melanoma can look a lot like age spots and can develop in moles. That being said, it does not really look like sarcoma at all. Melanoma is the most dangerous form of skin cancer in the world. Though it only accounts for less than one percent of skin cancer cases, melanoma causes the majority of deaths from skin cancer, according to the Skin Cancer Foundation. That’s why it’s imperative to see a doctor if you’re worried you have skin cancer. Melanoma is most commonly caused by UV rays from the sun or tanning beds.

If you see a strange spot on your skin or notice that a spot is changing, make sure you look for the ABCDE signs of melanoma, according to the Skin Care Foundation:

We hope this article helps you to better understand the difference between melanoma and sarcoma. If you have recently developed a lump, a new spot on your skin, or noticed that a lump or a spot is changing, it’s best that you see your doctor as soon as possible.

If you have already seen a doctor and know that your spots are purely cosmetic, feel free to come into the True Skin Care Center in Chicago! We can help you improve the appearance of odd spots with non-surgical cosmetic treatments.